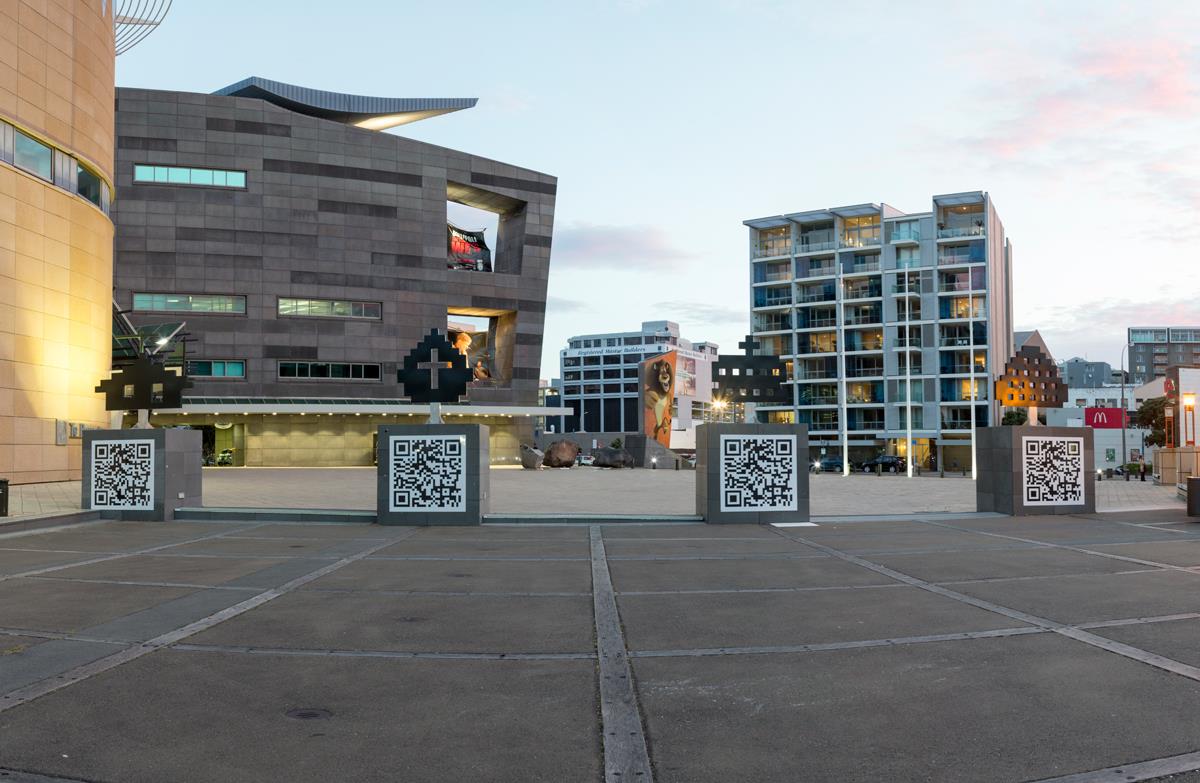 a (very) brief history of aotearoa is the new temporary sculpture that opened on 24 February on the 4 Plinths at the Te Papa forecourt. The work of Tauranga artist Kereama Taepa, its four aluminium pieces, in pixelated “space invaders” shapes, form a Māori meeting house representing Māori habitation; a mitre, representing the missionaries and early European settlement; a crown, representing the Queen and the signing of the Treaty of Waitangi; and the Beehive, representing our current government.

Today’s technology is further conveyed by large QR codes fixed to the sides of each plinth. These take the viewer with a smart device to a web-based game in the same icons as the sculptures are presented in the popular space invaders game format.

This work will be on display until January 2018.

The aim of the 4 Plinths Sculpture Award is to foster art, artists and audience interactions, and to provide an opportunity for established and emerging artists to work in the area of large-scale public sculpture.

Temporary sculpture on the 4 Plinths enables artists to realise a public sculpture, with all the challenges of scale, robustness and rigour that come with working in a tough environment and in a highly visible space.

The first installation was Green Islands, 2008-10 by Regan Gentry. His wire trees were an ironic response to the absence of vegetation in the stark, open site.

The second was Mimetic Brotherhood, 2010-12 by Peter Trevelyan. His four rubberised, abstract shapes engulfed the plinths, their shiny steel surfaces reflecting and mimicking everything within range – clouds, the harbour, and passers-by.

The third was Out of the Dusk, 2012-14 by Joanna Langford. It reflects the artist’s response to environmental degradation and  to the industrial features of the harbour close by.

The fourth was Rita Angus used to grow her own vegetables, by Glen Hayward was in place from 2014-2016 and featured four replica shards of broken pottery from the Rita Angus house garden. Constructed of laminated macrocarpa and painted to the finish of crockery, the shards were 50 times the scale of the originals with the patterns carefully reproduced.