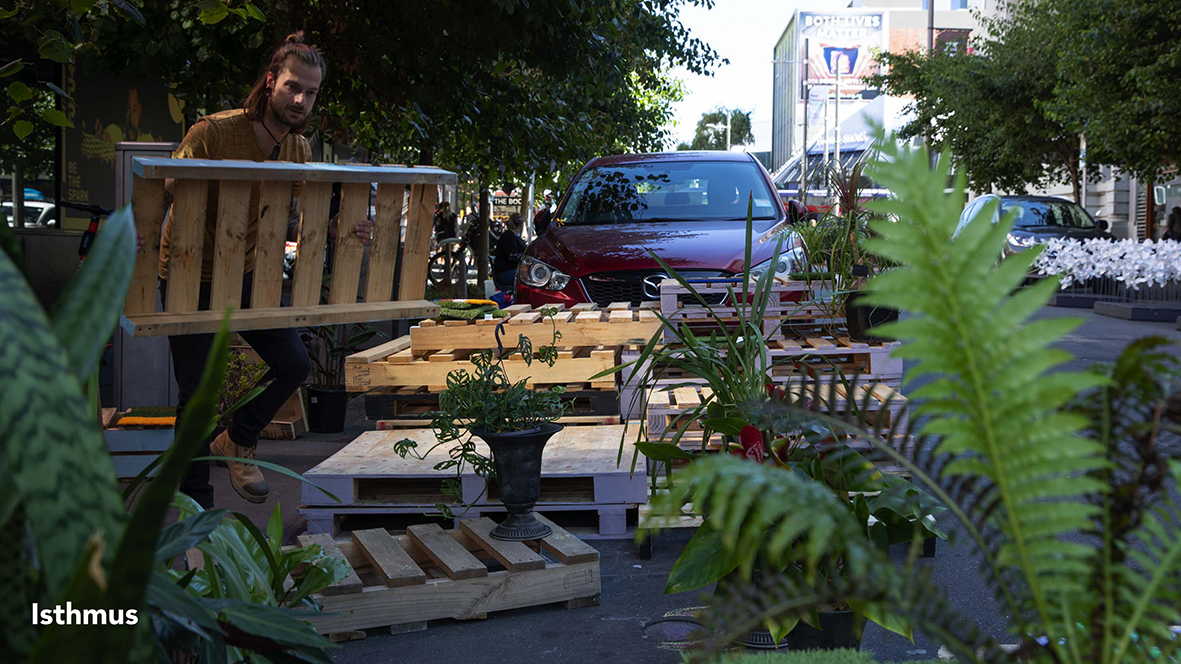 We are excited to announce that we've opened our call for proposals for PARK(ing) Day 2022! Submissions are due on 31 January 2022, with PARK(ing) Day itself scheduled for Friday 4 March. The following Friday 11 March is set aside in case of bad weather.

We've also increased the contribution paid to participants from $300 to $500 for this round!

The mission of PARK(ing) Day is to call attention to the need for more urban open space, to generate critical debate around how public space is created and allocated, and to improve the quality of urban human habitat. We welcome submissions from creatives and community groups interested in taking over a Cuba Street car park for the course of one day.

Usually held in the northern hemisphere in September, PARK(ing) Day is an annual open-source global event where citizens, artists and designers collaborate temporarily to transform metered parking spaces into “PARK(ing)” spaces: temporary public places. The mission of PARK(ing) Day is to call attention to the need for more urban open space, to generate critical debate around how public space is used, created and allocated, and to improve the quality of urban human habitat … at least until the meter runs out!

The original PARK(ing) Day concept was initiated by Rebar, www.rebargroup.org.

All Hands on Deck

Is it a bird? Is it a plane? No—it’s a giant hybrid face-hand. After almost three years perched atop Christchurch Art Gallery, Ronnie van Hout’s Quasi is relocating to the roof of City Gallery Wellington.

Initially commissioned by Christchurch Art Gallery Te Puna o Waiwhetū in 2016, the public sculpture is a partial self-portrait of van Hout, and is based on scans of the artist’s own body parts.

“It’s as if ‘the hand of the artist’ has developed a monstrous life of its own”, says City Gallery Chief Curator Robert Leonard.

After its stint in Christchurch, Quasi has received some much-needed TLC from van Hout, to prepare for the wild Wellington wind. The five-metre tall sculpture will soon be installed on City Gallery’s roof, presiding over the largely abandoned Te Ngākau Civic Square.

“When City Gallery was offered Quasi for their roof, the Trust leapt enthusiastically at the chance to help make it happen. Since then we have been working in partnership with the Gallery, and with the support of Wellington City Council, the Wellington Community Trust and former trustee, Richard Burrell. Now we’re ready to install the work”, says Wellington Sculpture Trust Chair Sue Elliott.

Ronnie van Hout was born in Christchurch, but now lives in Melbourne. ‘Quasi’ references Quasimodo, the bellringer in Victor Hugo’s 1831 novel The Hunchback of Notre-Dame. Misshapen and misunderstood, he was hated by the people but turned out to be a great tragic-romantic hero—a beautiful soul. Will Wellingtonians grow to love this monster?

Final preparatory work is taking place and install day will depend on Wellington’s weather. Keep your eyes turned towards the skies in the coming weeks to catch a glance of Quasi. (A media advisory will be issued once the sculpture has been installed).

The Wellington Sculpture Trust was established in 1983 and is a voluntary and independent charitable trust dedicated to enriching Wellington by providing contemporary innovative public art for the city.