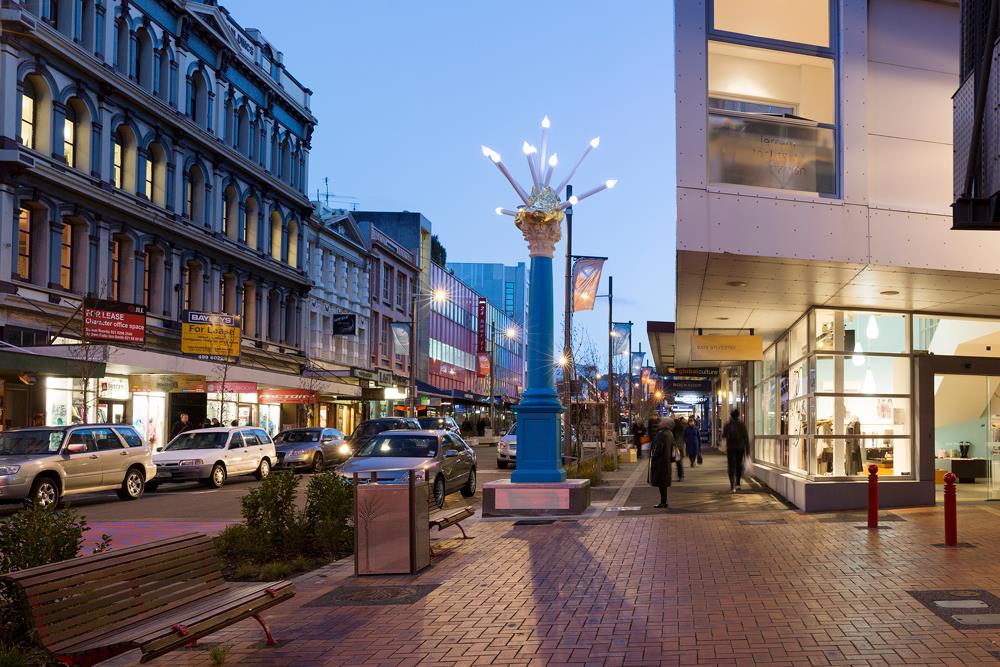 The work to commemorate and celebrate the prominent Wellington businessman and philanthropist, Thomas George Macarthy was unveiled on 12 August 2015. A joint project between the T G Macarthy Trust and the Wellington Sculpture Trust, it marks the centenary of the Trust T G Macarthy established on his death in 1912.

Situated in lower Cuba Street, not far from the Michael Fowler Centre, the work has already claimed this space and commands attention. At over 6 metres high the sculpture sits upon a pedestal and includes a tall blue Corinthian column and hand carved capital, with a large gold plated bronze nugget on top. Protruding from the nugget are candles with hand-blown glass lights which at night illuminate the sculpture and its surroundings.

The gold nugget references the gold rush that brought Macarthy to New Zealand, and the column is typical of the classical modern architectural features used in/on buildings around the early 1900s. The candles are celebratory but also speak to the way the Trust has been a beacon of hope for countless numbers since its inception, providing $61.4 million to charitable causes throughout the Greater Wellington region.

The Public Trust manages the T G Macarthy Trust, considered New Zealand’s largest perpetual charitable trust with assets worth $75 million. According to chief executive Graeme Hansen, “It’s likely that most people in the Wellington region have benefited from this man’s generosity without knowing it.  Given the trust’s 100-year milestone, it’s timely that T G Macarthy and the trust are recognised in this way.”

Members of the board, as specified in Macarthy's will include the Prime Minister, The Governor-General, the Wellington mayor and the Roman Catholic Archbishop of Wellington.

Thomas George Macarthy was a respected businessman and public figure holding positions as director of the Wellington Opera House and a member of the board of directors of the Bank of New Zealand and the Wellington-Manawatu Railway Co., and was its chairman in 1897.  He was an advocate of education and providing for the needy, which in his day often meant helping women.  He was said to be a quiet man and didn’t seek publicity, often making donations to charities anonymously.  He was posthumously inducted into the Fairfax Business Hall of Fame in 2012.  He married in 1897, at the age of 63, to 23-year-old Mary Ellen Fitzsimmons.

Grants from the T G Macarthy Trust are given to charities each year which serve the old Wellington province – covering parts of the Wairarapa through to Wellington.  As outlined by Macarthy in his will, grants are made in the areas of early childhood, youth organisations, hospitals, social services, education, the elderly, mental health and disabled.