Mary is a sculptor of words. Her work contains a narrative - a psycho, sexual, social, political commentary on contemporary life and an engagement with the politics of history, feminism and social context.

Browne graduated with a Master of Fine Arts degree with First Class Honours in sculpture from the Elam School of Fine Arts at the University of Auckland in 1982. Since then she has exhibited widely throughout New Zealand and developed several public art commissions. Recent projects include ‘Byword’ a series of nine stone seats for Auckland City and ‘Meteorol’ for the Brick Bay Sculpture Park. Another well known work is ‘Body to Soul’, 1996 - a monumental stone staircase in Wellington’s Botanical Garden

Words are the constant feature of Browne’s work and she explores the metaphoric, material and visual qualities of language in a range of media including granite, glass, metal, canvas, leather and paper. Browne frequently employs found texts: in her work, mottoes, maxims, instructions and most recently classic movie or song lines are represented and given new form and context. The works challenge conventional readings and demonstrate how apparently simple words or maxims can have multiple layers of meaning. There is a delight in the double entendre and the clash of high art and the sign writers craft. Works such as Firm Grip, 2004 and Soft Core, 2004 and Goodness series of 2006 conflate the tactile materiality of leather with the connotations of the words depicted. 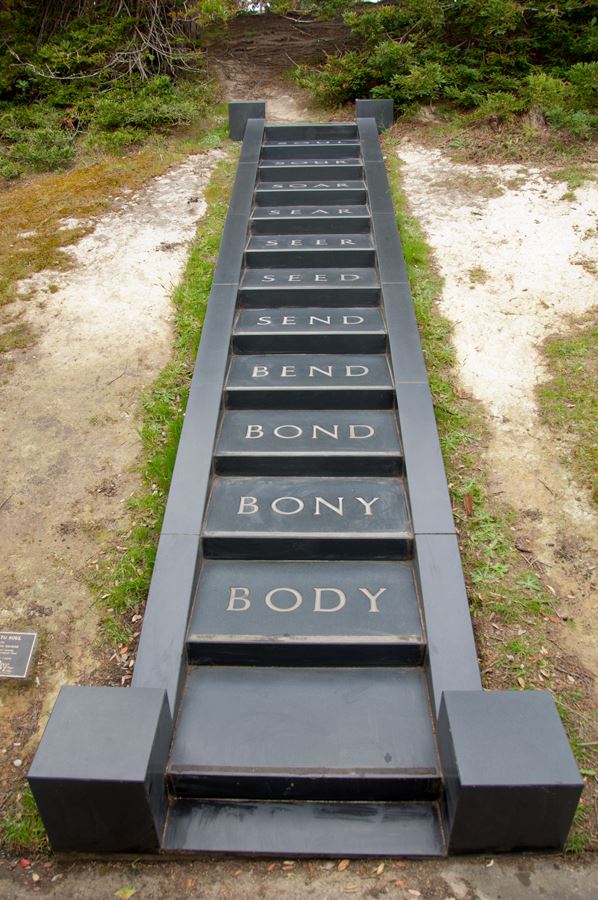