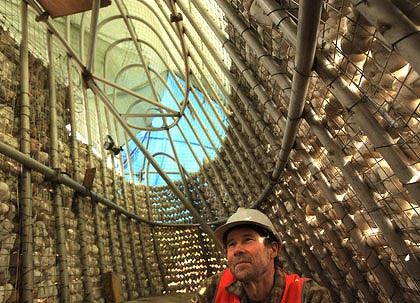 Chris Booth is a New Zealand sculptor and was the 1982 recipient of the Frances Hodgkins Fellowship.

Chris studied at the University of Canterbury's school of fine arts before taking two years of specialist sculptural study with such prominent sculptors as Barbara Hepworth and Denis Mitchell.

His work, largely made on commission, is usually monumental in form, and can be found throughout New Zealand, Australia, Europe, and North America.

Chris was featured in the 1991 documentary film When A Warrior Dies which focused on his construction of a very large and imposing sculpture at Matauri Bay overlooking the Cavalli Islands for the Ngati Kura people of the district. The sculpture stands before the resting place of the MV Rainbow Warrior which was bombed and sunk by French Government DGSE secret agents in Auckland on 10 July 1985. The Rainbow Warrior propeller is in the centre of the sculpture, surrounded by an arch of large basalt boulders recovered from a local beach.

Consistent with his personal ethos, as of 2012 he is developing 3 major living land art works e.g. the SLS (Subterranean Living Sculpture) in association with the Eden Project in Cornwall, UK underway for five years. This living sculpture seeks to raise the profile of the humblest plants and fungi to match their immense contributions.